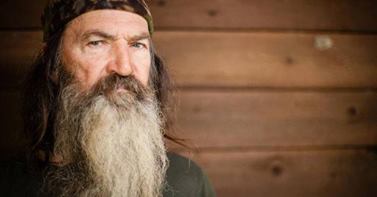 Just another sad truth that the ignorance the internet is creating…people actually believe the media that this is a Freedom of Speech issue. People and companies are afraid to stand behind what they really believe because they are afraid of what others will say about them on social media. Funny thing is that “social” media is anti social behavior….people don’t talk to each other or meet one another for conversations. It’s sad that this is the face of Freedom of Speech and Freedom of Religion when there are real people suffering. His comments were not from the Bible…they were of ignorance about what he does not understand and is afraid of…uses the Bible to hide behind. A&E and the Robertsons sucked you in to watch their new season…..perfect timing and the sheep will follow. The Bible says to accept one another and not judge…..who are the Robertson’s to judge others…that is not very Bible like. Some people may think that killing Ducks is being a savage. People think the Robertson’s are “simple people”…simple people don’t have big houses, fancy trucks and have camera’s following them around. Wake up people !!!

This entry was posted in Uncategorized and tagged A&E, Duck Dynasty, Freddom of Religion, Freedom of Speech, Frown Upon, Phil Robertson. Bookmark the permalink.